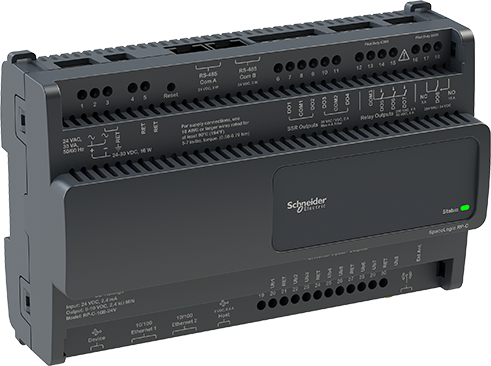 SpaceLogic* RP-C Pro is a high-power controller that offers a multi-room connectivity hub for Connected Room Solutions. The RP-C Pro controller has greater memory space for large room and luxury suite applications. The 16 I/O point controller is integrated into Connected Room Solutions and EcoStruxure Building Operation and is positioned for room control as well as well-being, comfort of occupants in an energy-efficient way.

The RP-C can either be used as a standalone BACnet/IP field controller or as part of an EcoStruxure BMS with a SpaceLogic AS-P or AS-B server or an Enterprise Server as the parent server. The RP-C can also be reconfigured through the EcoStruxure Building Operation software to support BACnet MS/TP, instead of BACnet/IP. The RP-C features a wireless chip, which enables commissioning of the controller with the Commission mobile application and allows tenants to change the room comfort settings using their smartphones with the Engage mobile application. Web services enable web access directly to the RP-C, making the controller an open IoT hub in the room or space area.

The RP-C has the following features:

The BACnet/IP controllers are based on open protocols that simplify interoperability, IP configuration, and device management:

The BACnet/IP controllers have a dual-port Ethernet switch, which enables flexible network topologies:

In a star topology, the controller and the parent EcoStruxure BMS server are individually connected to an Ethernet switch. Daisy-chain multiple controllers together to reduce installation time and cost. When using a ring network topology, in the event of a broken IP network or a non-operational controller, RSTP will enable rapid identification of the location of the detected error while maintaining communication with the controllers on either side of the break.

The RP-C Pro range includes two different models, which offer the same set of I/O point type, named 16B, but with support for different supply voltages. The RP-C-16B-F-24V model support 24 VAC/DC power supply, whereas the RP-C-16B-F-230V model is a 230 VAC model.

The fully programmable RP-C models provide flexibility through support of both Script and Function Block programming options. The RP-C promotes efficiency and standardization through the use of standard controller applications.

Models with a versatile mix of I/O points

The universal inputs/outputs are ideal for any mix of temperature, pressure, flow, status points, and similar point types in a building control system.

As counter inputs, the universal inputs/outputs are commonly used in energy metering applications. As RTD inputs, they are ideal for temperature points in a building control system. As supervised inputs, they are used for security applications where it is critical to know whether or not a wire has been cut or shorted. These events provide a separate indication of alarms and events in the system.

For all analog inputs, maximum and minimum levels can be defined to automatically detect over-range and under-range values.

Only devices with safe extra low voltage equipment (SELV/PELV) inputs/outputs should be connected to the controller universal inputs/outputs.

The solid-state relay (SSR) outputs can be used in many applications to switch 24 VAC or 24 VDC on or off for external loads such as actuators, relays, or indicators. SSRs are silent and are not adversely affected by relay contact wear.

The relay outputs support digital Form A point types. The Form A relays are designed for direct load applications.

All RP-C models can be equipped with optional covers to reduce access to the screw terminals and wires. 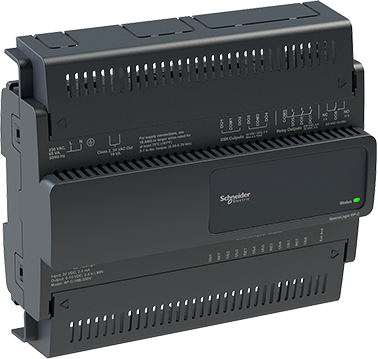 RP-C with equipped with optional covers

RP-C is a Bluetooth Low Energy (BLE) enabled product. You can use this wireless connectivity option to connect the RP-C with a smartphone or tablet running the Commission mobile application or the Engage mobile application for room comfort settings.

Through Wireless Adapter - Advanced connected to the host USB port, Zigbee TM wireless connectivity can be enabled for the RP controller. The controller can extend its point count through the Zigbee wireless network and bring flexibility in your applications. The RP controller equipped with the adapter is a Zigbee Certified Product that is compliant with Zigbee 3.0. For more information on the adapter and supported wireless devices, see the Wireless Adapter - Advanced Specification Sheet.

The BACnet/IP controllers support local trends, schedules, and alarms, enabling local operation when the controller is offline or used in standalone applications.

The battery-free power backup of the memory and real-time clock helps prevent data loss and allows seamless and quick recovery after a power disruption.

In WorkStation, you update the firmware of multiple BACnet/IP controllers at the same time and with minimum down time. The EcoStruxure BMS server keeps track of the installed firmware to support backup, restore, and replacement of the controllers and sensors. The server can host controllers of different firmware versions.

The RP-C controller has two configurable RS-485 ports, which can be configured to support three different types of networks:

The RP-C controller can run one of each network type. 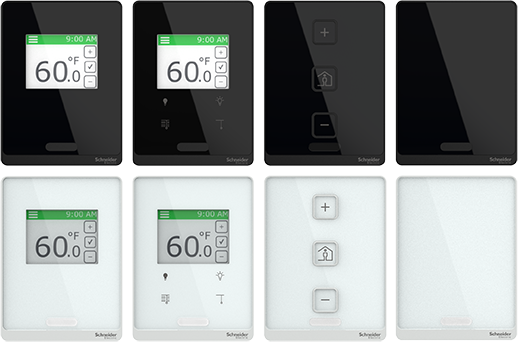 The RP controller sensor bus provides both power and communications for up to four sensors that are daisy-chained using standard Cat 5 (or higher) cables. This maximum number of sensors that can be connected to a controller is regardless of the sensor model and the combination of cover and sensor base type:

For more information, see the Specification Sheets for the RP controller expansion modules.

The RP controller Modbus network allows standard Modbus devices and the KNX Modbus gateway (RP-C-EXT-KNX) to be connected to the controller.

The Modbus RTU protocol is used for the communication. The RP controller acts the Modbus client and the connected devices act as servers.

The RP controller Modbus network supports up to 10 connected Modbus devices with the following restrictions:

Through the KNX Modbus gateway (RP-C-EXT-KNX), the RP controller can communicate with KNX devices such as push-buttons and sensors.

The KNX Modbus gateway provides a KNX to Modbus interface that connects to one of the RP controller's configurable RS-485 ports.

The RP controllers support both BACnet IP and MS/TP protocols. The controller can be configured to use either protocol. This feature enables both retrofitting of MNB and b3 BACnet devices while reusing parts of the existing cabling and equipment, as well as a later transition from the BACnet MS/TP (RS-485) network to an IP based network.

An RJ45 to screw terminal block adapter is required to connect the RP controller to the BACnet MS/TP network of the AS-P or AS-B server. The adapter can be ordered from Schneider Electric. The adapter is available in two models, with an isolated or non-isolated RS-485 interface. For more information, see section “Part Numbers”.

To connect the adapter, it is recommended that you use a Cat 5 (or higher) UTP cable with eight conductors and RJ45 connectors. The cable should be rated for the target environment and have a maximum length of 0.3 m (12 in.). The cable is not included and needs to be purchased separately.

The Engage mobile application enables control of room temperature, fan speed, lights, and blinds/shades directly from a smartphone. A user can manage these settings when the application is connected to the RP controller.

The Engage mobile application is free and available for download from Google Play and Apple App Store.

The mobile application is designed for use with Android, Apple (iOS), and Microsoft Windows 10 and Windows 11 devices. For more information, see the EcoStruxure Building Commission Specification Sheet.

With the Commission mobile application, you can easily discover BACnet/IP controllers on the IP network. You can change the configuration of each controller, including the BACnet and IP network settings, location, and parent server. To save engineering time, you can save common device settings and then reuse them for controllers of the same model.

The power of the RP controller is fully realized when it is part of an EcoStruxure BMS, which provides the following benefits:

WorkStation and WebStation provide a consistent user experience regardless of which EcoStruxure BMS server the user is logged on to. The user can log on to the parent EcoStruxure BMS server to engineer, commission, supervise, and monitor the BACnet/IP controller and its I/O as well as its attached SpaceLogic Sensor devices. For more information, see the WorkStation and WebStation specification sheets.

The fully programmable RP controller models have both Script and Function Block programming options. Existing programs can easily be reused between the EcoStruxure BMS server and the controller.

The enhanced Device Discovery in WorkStation enables you to easily identify BACnet/IP controllers on a BACnet network and to associate the controllers with their parent server.

Project Configuration Tool enables you to perform all the engineering off site, without the need for physical hardware, which minimizes the time you need to spend on site. You can run the EcoStruxure BMS servers virtually and engineer the BACnet/IP controllers before you deploy your server and controller applications to the servers and controllers on site. For more information, see the Project Configuration Tool specification sheet.

To improve engineering efficiency and standardize engineering practices, fully designed and tested controller applications are available at bms-applications.schneider-electric.com for use with the RP controllers. This library contains applications for different RP controller models and application types, such as fan coil units, ceiling solutions, lights and blinds. These preconfigured controller applications are packages that include all software programs, and for example graphics, alarms, and documentation such as functional specifications and I/O wiring schedules, that are needed for your projects. The online repository can be accessed using common web browsers on Windows PCs as well as mobile devices running Apple iOS 11.3 (or later) and Android 6.0 Marshmallow (or later).

The Zoning option for WorkStation and WebStation provides access to an interactive zoning tool that enables easy reconfiguration of Connected Room Solutions and flexibility when switching between zones. The WebStation zoning tool provides a graphical interface that enables quick editing of zones from any web browser device.

The RP-C-16B-F-24V and RP-C-16B-F-230V models support up to eight segments, which can be used to support rezoning in a building.

The RP controller uses the RESTful API, which allows IT web services to easily interact with software applications. The flexibility of the RESTful API allows the RP controller to handle multiple types of input and return different data formats. With Web services, clients can read/write data (BACnet values) directly from/to the controller. Web services use resource methods GET, PUT, POST, and DELETE to access and use the data. HTTPS is used for communication between the client and the controller.

The Web services function is disabled by default. When enabled, it requires approximately 200 kB of RP controller memory. 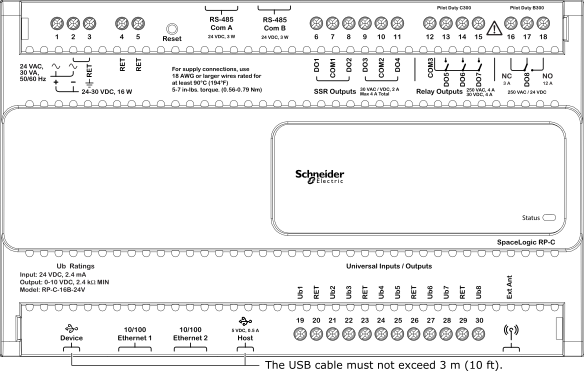 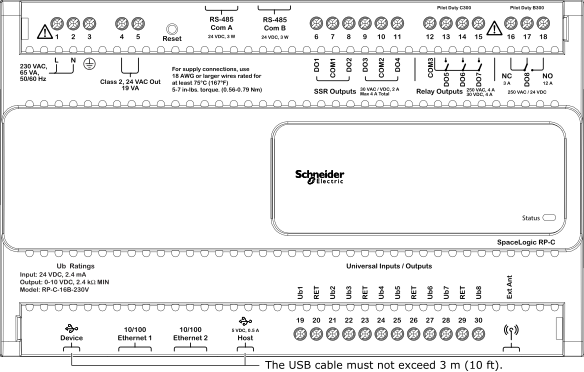