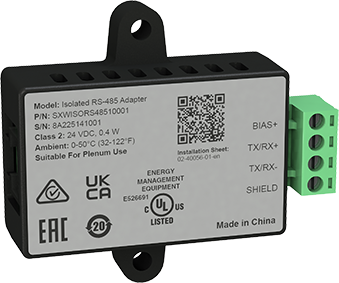 A separate connection cable is required to connect the adapter to the controller. The cable is not included and needs to be purchased separately.

The RS-485 Adapter can be used with the following BACnet/IP controller models, which support reconfiguration for BACnet MS/TP communication:

The RS-485 adapter has a protruding bracket on each long side with a mounting hole to facilitate installation of the device with two screws (not included). The device can also be fastened using cable ties or mounted in line with a cable run. The RS-485 adapter is suitable for plenum use.

This section provides information on regulatory compliance and approvals for the RS-485 Adapters.