This configuration is recommended if the following conditions apply to the RS-485 network devices to be connected to the SmartX server's RS-485 port:

If all the devices being connected to the SmartX server's RS-485 port provide failsafe receivers, the configuration becomes very simple and no node or distance reductions are called for. The failsafe receivers can typically operate with no added bias resistors.

The shield drain wires are connected together at each device, allowing the shield to continue on past the devices for the full length of the bus.

The example diagram below shows the RS-485 Com B connections on the Automation Server, SmartX AS-P servers, and SmartX AS-B servers. The guidelines are the same for Com A. 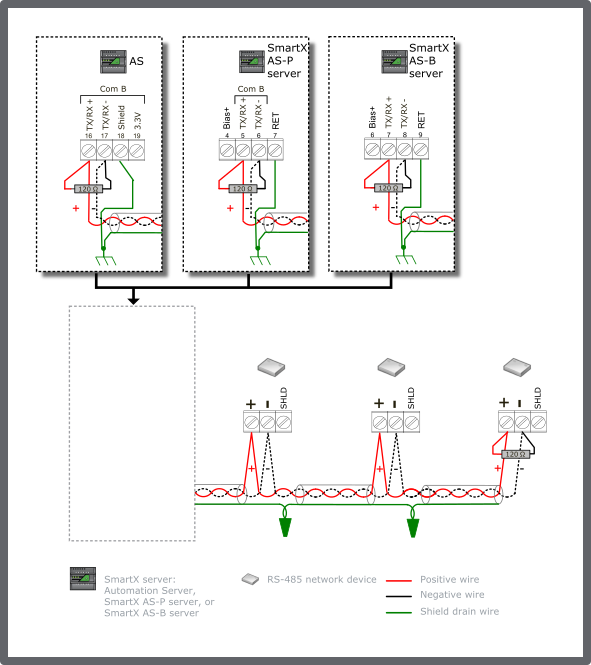 The unit load rating will determine the recommended maximum number of nodes you should install on this copper segment. Select the higher unit load value between answers Q5 and Q6B. For more information, see Worksheet for Configuration of RS-485 Bus with Generic RS-485 Devices . The standard RS-485 unit load budget is 31.5 after subtracting the 0.5 for the SmartX server. Divide 31.5 by the UL value (from Q5 or Q6b). The result is the maximum recommended node count in regards to bus loading.

Example: If the answer to Q5 is 0.25 and the answer to Q6b is 0.32, use the value 0.32. Calculate the maximum recommended node count as 31.5 / 0.32 = 98 nodes. It is recommended that you use the calculated 98 node maximum limit instead of the 126 node value suggested by the 0.25UL published UL load rating. It is likely that the node has added bias resistors that are not considered in the 0.25 published value.

The recommended limits on RS-485 bus node counts discussed here pertain to hardware bias and unit load considerations only. The recommended maximum node count may be further limited based on product and system version.

For this terminated configuration with no biasing, the maximum cable length may extend to the full standard length of 1200 m (4000 ft).