The SmartStruxure Solution smoke control system is constructed with two primary networking tiers. At the top is the TCP/IP network which interconnects all the Smoke Control Servers, Workstation(s) and optional other Enterprise and Report Servers. The BACnet/IP interface to the Fire Alarm Panel (FAP) also operates at the top tier if contact interface to the FAP is not used. The SmartStruxure Solution provides a second tier of communications networks that connect below the Automation Servers or AS-Ps. Up to two RS-485 MS/TP token passing BACnet networks are supported from each Automation Server (Channel-A and Channel-B) or AS-P. Each of the two BACnet network ports support up to 127 MS/TP Field Controllers.

The following figure presents a simple diagram of the two tier architecture. 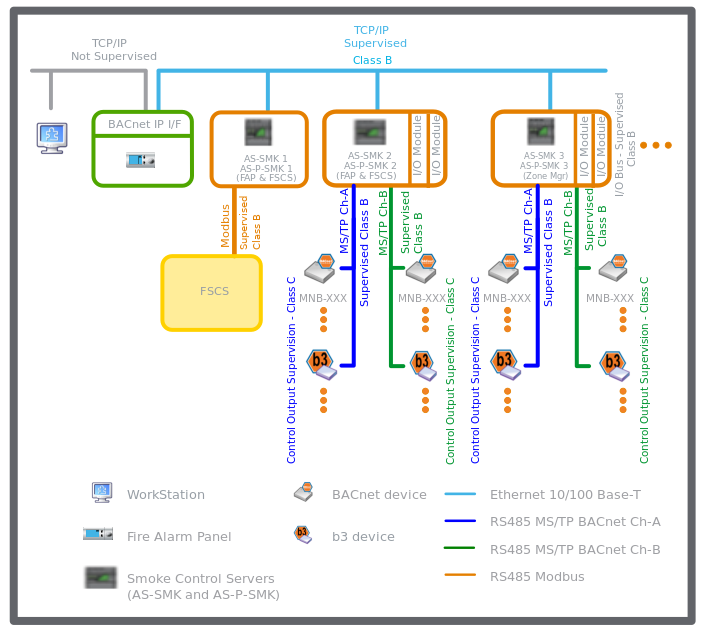 The FAP resides on the TCP/IP network and sends alarm information via BACnet/IP to the Smoke Control Server acting as FAP manager (AS-SMK 1 or AS-P-SMK in the figure). The same Automation Server or AS-P also manages the FSCS panel through the Modbus channel. The BACnet/IP connection is supervised from the Smoke Control Server (AS-SMK 1 or AS-P-SMK 1). The Modbus connection is supervised from the FSCS. The two other Automation Servers show the second MS/TP network tier of the system with two BACnet MS/TP buses extending down from AS-SMK 2 (AS-P-SMK 2) and AS-SMK 3 (AS-P-SMK 3). These buses connect to the family of field controllers (b3 and MNB Series) listed in this guide. For more information, see MS/TP BACnet Controllers .

The StruxureWare Building Operation software is an open architecture platform operating in the Windows PC environment. It provides a friendly, comprehensive, and customizable set of tools that control and monitor the facility management system through TCP/IP Ethernet and MS/TP networks. The software includes graphics editing for creating customized graphical displays to provide easily interpreted presentations of the information monitored in the facility and accommodate central management and control of the equipment in the facility.

The smoke control system does not depend on these resources to operate. However, it can use them to assist in diagnosing faults reported on the FSCS panel. For more information, see FSCS Basics .

While the term SmartStruxure Solution refers to the whole system of hardware and software products, it is worth noting that the Workstation, Enterprise Server, Report Server or WebStation, which may exist on the TCP/IP network, do not participate in the execution of smoke control applications. They also do not transport smoke control communications.

With Ethernet networks, you cannot achieve the interconnection between the Automations Servers, AS-Ps, FAP and Workstations without additional Ethernet communications equipment. In a smoke control system, the communications required to execute the applications can only pass through equipment included within the UL 864 system listing. To support the TCP/IP network with smoke control systems, the EIS series Ethernet switch products discussed in this guide are approved to interconnect the smoke control TCP/IP products. For more information, see Network Accessories .

The following diagram presents a collection of these system elements: 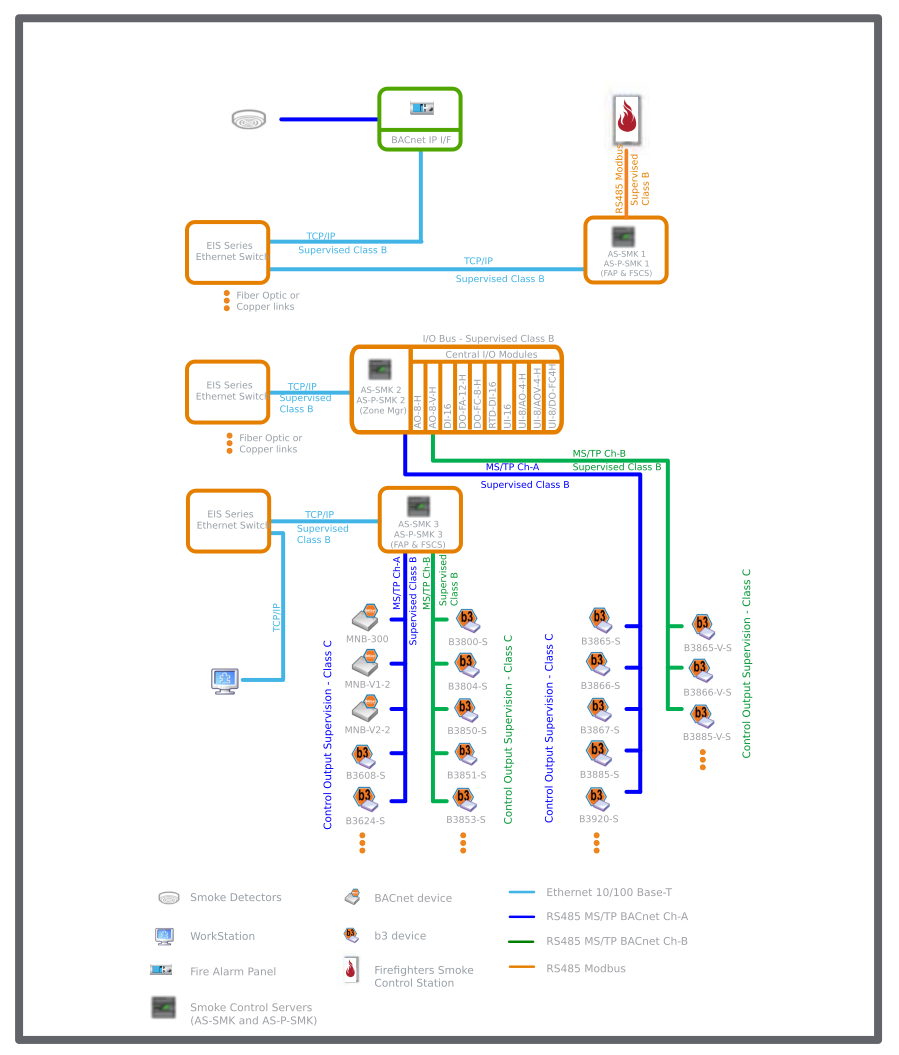 The TCP/IP network provides the main communication bus throughout a facility. The EIS Ethernet switches are installed around the facility as needed to achieve the distributed port connections for the Automation Servers, or AS-Ps and other TCP/IP components. The network connections used for the smoke control application cannot make use of any other communications devices other than the UUKL recognized EIS Series products listed in this guide.

Category 5 twisted pair cables with RJ-45 connectors should be used for connecting to the Ethernet 10/100 port on the Automation Server or AS-P module. The recommended maximum cable length is 100 meters (330 feet).

All of the ports on the EIS series switches provide isolation from the other ports. A fault on one port will not affect the other ports. The spare 10/100BASE-T ports on the EIS series switches (fiber and copper models) can be used to connect with non-UUKL devices such as Workstations, servers and 3rd party products used within the building automation system.

The BACnet MS/TP bus serving the controllers performing smoke control must not be connected directly with any non-UUKL listed products. When non-UUKL products need to be connected with the MS/TP network for general purpose HVAC comfort control application, one of the following two options can be used: 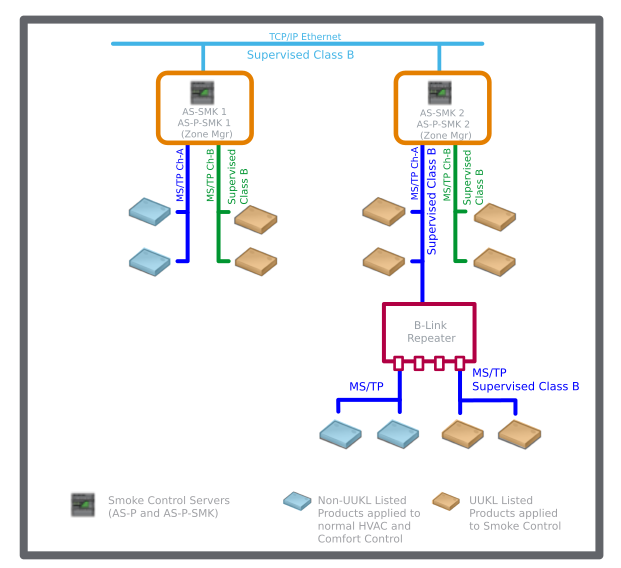 The MS/TP bus operates at serial data transmission rates of 9600, 19200, 38400, or 76800 bps. Most system installations are installed using 76,800bps. In some installations, however, it may be necessary to lower the speed to 38,400 bps due to the effect of cable characteristics, cable length or node count.

For smoke control applications, it is recommended that the MS/TP bus be run at 38,400 or 76,800bps. This is to minimize the timing latency incurred by the protocol and the load applied to the network by the communications supervision techniques applied to all smoke control controllers.

The following figure presents an example smoke control system configuration used to develop the application programs and submit for the UL 864 system testing and evaluations. The system is presented here simply as a reference associated with features, requirements, and restrictions that must be observed when configuring a compliant smoke control system. 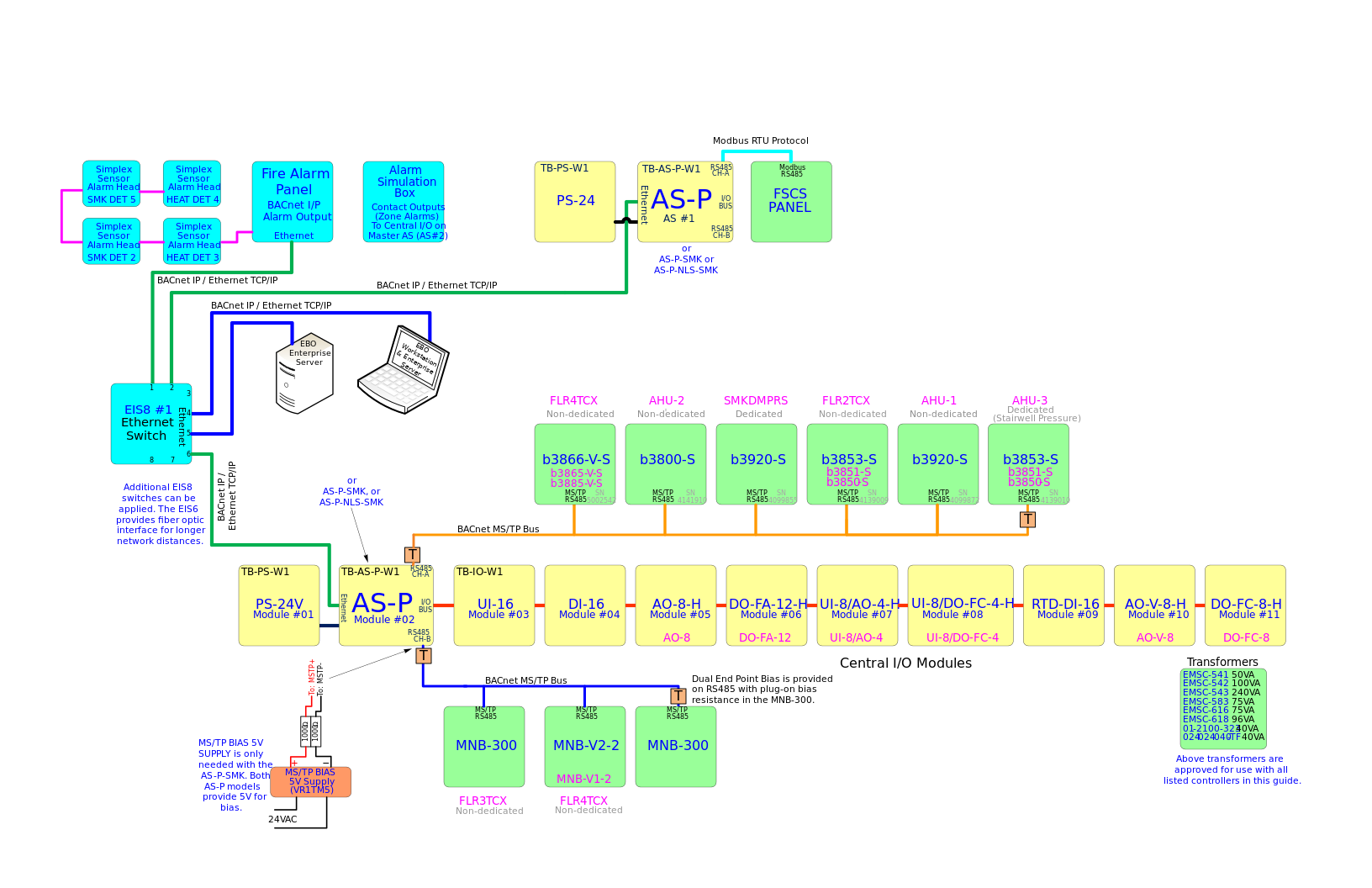