Powering Up an IP-IO Module

You perform the following steps to power up an IP-IO module.

The IP-IO module device can be installed on a DIN rail or other flat surface inside a cabinet.

A DIN rail is a common and convenient technique for installing the IP-IO module along with other associated control and monitoring devices. The most efficient ventilation is achieved with the wall-mounted DIN rail oriented horizontally and with adequate space provided between the IP-IO module rail and adjacent rails or other panel-mounted devices.

The IP-IO module is typically installed horizontally (on a DIN rail going from left to right), with the device label text in the upright position reading left to right. 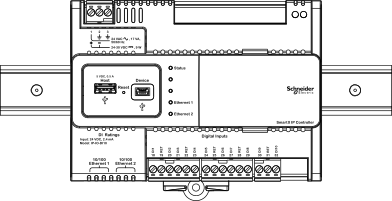 The restrictions on installing the device in other orientations differ depending on the operating conditions.

Under normal operating conditions of 0 to 50 °C (32 to 122 °F), the IP-IO module can be installed in the following orientations: 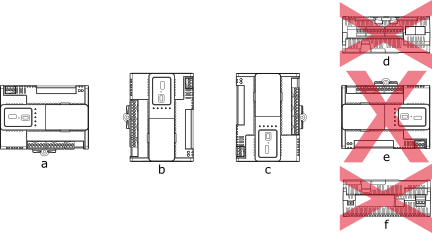 Installation orientation restrictions for the IP-IO module operated in normal conditions, 0 to 50 °C (32 to 122 °F)

When the IP-IO module is used for rooftop applications, -40 to +60 °C (-40 to +140 °F), the device should be installed horizontally, with the device label text in the upright position reading left to right. See “a” in the following figure. Any other installation orientation (“b”, “c”, “d”, “e”, and “f” in the figure) may exceed the IP-IO module's thermal specifications, which can damage the module. 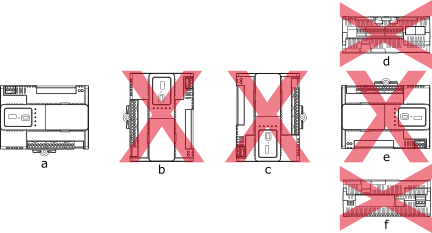 The IP-IO module can be installed in a standard DIN enclosure.

When installing IP-IO modules in a cabinet, it is recommended to provide ample space between the DIN rails and modules for sufficient ventilation. 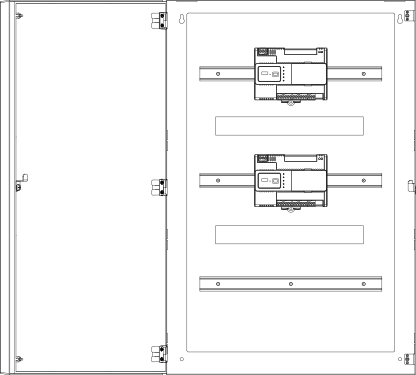 IP-IO modules installed on horizontal DIN rails in a cabinet

To help prevent the device from sliding down or sideways on the DIN rail, install an end clip for DIN 35 (part number SXWDINEND10001) tightly against the bottom or rightmost device on the rail. The end clip is easily removed if you bend the snap lock open with a screwdriver. 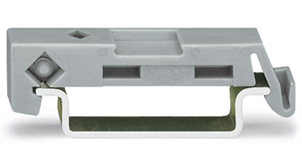 End clip for DIN 35 fixed across the DIN rail

The IP-IO module is delivered with terminal blocks installed on the device.

The terminal blocks are removable. You can replace an IP-IO module in seconds because no terminal wiring is affected. The only exception is the high power relay output on the IP-IO-UIO5DOFA4 model, which uses a two-position fixed terminal block due to current requirements.

All IP-IO module models can be equipped with MP-C Display (part number SXWMPCDSP10001), which is an add-on module that enables manual override control of analog and digital outputs. The module consists of an LCD display and keys. The module is designed for permanent installation. 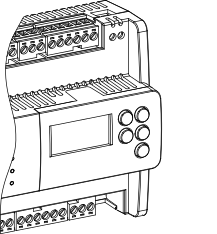 The built-in power supply is based on a half-wave rectified, non-isolated design, which is complemented with electronic protection components for transient protection, overload protection, and EMC compliance.

To power the IP-IO module, you can use a transformer or a DC power supply:

A separate, local 24 VAC step-down transformer is recommended to power each BACnet/IP device. The transformer with appropriate VA rating may also be used to power the locally connected I/O devices. The separate transformer helps to avoid problems with ground loops, 24 VAC induced EMI on LAN, low or distorted AC voltage level at the controller, and excess transformer load due to the half-wave power supply, which can result in intermittent equipment detected faults, loss of communications, or equipment damage.