One of the most hazardous situations that can be faced in a building is smoke. While fires themselves are often damaging, it is smoke that can cause the most injuries.

The primary means of controlling smoke movement is by creating air pressure differences between smoke control zones. The basic concept of building pressurization is to establish a higher pressure in adjacent spaces than in the smoke zone. In this way, air moves into the smoke zone from the adjacent areas and smoke is prevented from dispersing throughout the building.

Smoke control systems are either dedicated or non-dedicated. A dedicated smoke control system is installed in a building for the sole purpose of controlling smoke. It is a separate system of air moving and distribution equipment that does not function under normal building operating conditions. Dedicated systems are used for special areas, such as elevator shafts and stair towers that require special smoke control techniques.

Non-dedicated smoke control systems are systems that share components with some other systems such as the building automation (HVAC) system. When activated, the system changes its mode of operation to achieve the smoke control objectives.

The goal of a fire control system is to contain and extinguish the fire as fast as possible. Fire control systems halt the fire, but not the smoke, and are often triggered automatically by the heat of the fire. These systems rely on a water supply, such as sprinklers, whereas smoke control systems usually rely on electricity to run fans and dampers.

Smoke control systems receive the location of the fire from the fire panel. The fire panel uses a combination of smoke and heat sensors to determine where the fire is located. In the event that signals are received from more than one smoke zone, the smoke control system should continue automatic operation in the mode determined by the first signal received.

Recent trends have indicated areas of refuge are being designed into many buildings as dictated by the Americans for Disabilities Act (ADA). Specifications may refer to these areas of refuge which are typically located adjacent to stairwells or elevator hoistways. These refuge zones may require special pressure compensation systems to maintain a tenable environment. The requirements for these systems must be dictated by the building's smoke control system designer based on the smoke control system design and its associated sequence of operation. When these types of zones are encountered, additional time and resources may be required to establish and verify compliance to the specification.

There are two types of shaft protection systems: 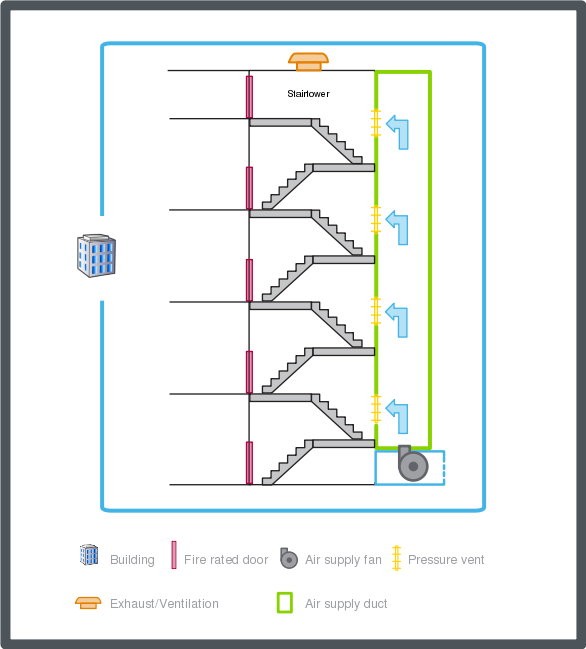 The goal of pressurized stairwells is to maintain a tenable environment within exit stairwells for the time necessary to allow occupants to exit the building. A tenable environment is defined as an environment in which the products of combustion, including toxic gases, particulates, and heat, are limited or otherwise restricted to maintain the impact on occupants to a level that is not life threatening. A secondary objective of stairwell pressurization is to provide a staging area for firefighters. This is achieved when stair shafts are mechanically pressurized, with respect to the fire area, with outdoor air to keep smoke from contaminating them during a fire.

There are two types of stairwell systems:

Elevator shafts present a particular problem with regards to smoke control. The elevator shafts form perfect chimneys to draw smoke into the upper levels of a building. Since elevators usually have openings on each floor, and the seals on elevator doors are often poor, the elevator shaft can become a mechanism to spread smoke throughout a building.

In order to have a usable elevator during a smoke emergency, the elevator shafts have to be pressurized in the same way a stair tower is pressurized. However, pressurizing the elevator shaft presents a number of problems. You can fit the elevator doors with improved seals and rubber sweeps. However, these steps do not completely eliminate air leakage. Moreover, most elevator shafts are not designed to be pressurized. There are also localized pressure differences that the cars create as they travel up and down the shafts. Shafts are often constructed of porous material that cannot contain the air pressure. Shafts are not designed for inspection after the elevators are installed, so finding and repairing cracks that would let smoke infiltrate or pressure escape is difficult.

While several methods for correcting the problems of air pressurization in elevators have been proposed and investigated, there are no firm recommendations regarding elevator smoke control. Refer to the NFPA 92 and UL864 standards for additional information. Remember the local AHJ and project specifications may require control beyond that specified in the above standards.

As discussed previously, pressurized stairwells are intended to control smoke to the extent that they inhibit smoke infiltration into the stairwell. However, in a building with just a pressurized stairwell, smoke can flow through cracks in floors and partitions and through other shafts to threaten life or damage property at locations remote from the fire. The concept of zoned smoke control is intended to limit this type of smoke movement from within a building.

Smoke control system activation should be started immediately after receiving an activation command. A maximum of 10 seconds transmission time is allowed, from the initiation of an activation signal (that is, a fire alarm input), to the time it reaches the smoke control system. The smoke control sequence should activate individual components and starts from the moment the smoke control command is issued (whether automatic or manual) to the final action. This time is 60 seconds for fan operation at the desired state and 75 seconds for the completion of the damper travel. Should an individual component fail, the time lapse from the moment the component reaches its final state and the moment its associated trouble signal annunciates should not exceed 10 seconds. This means that the annunciation of the trouble signal for a fan must occur within 70 seconds of the automatic or manual activation command. The annunciation of the damper trouble signal must occur within 85 seconds of the automatic or manual activation command.

This table summarizes the control and supervision time constraints applied by the UL 864 listing and NFPA 92. The applications within the Automation Server, AS-P and BACnet field controllers shall provide compliance with the following.